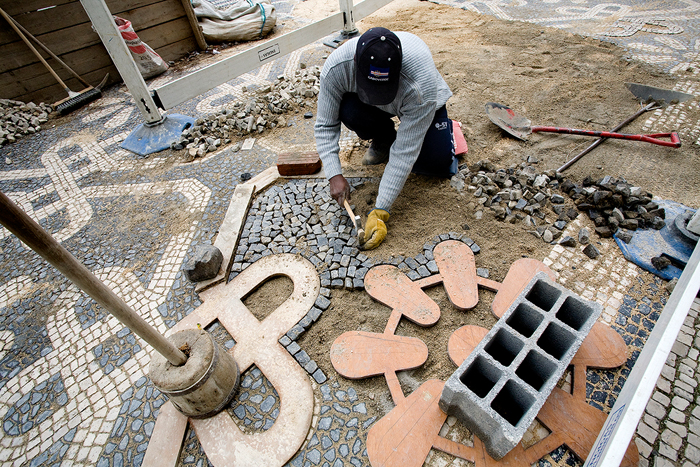 The Portuguese pavement or calçada Portuguesa is a true and authentic art – small limestone stones put one by one in the street in an often poetic and beautiful, sometimes even thoughtful and humoristic pattern. Apart from its beauty, this pavement is also sustainable, ecological, and very recognizable Portuguese – they even exported their street art to their colonies. Moreover, the rainwater can penetrate the soil (which is not the case with concrete), and the pebbles reflect the sunlight, which makes Lisbon the ‘white city’. Also, there would be mathematical patterns and secret messages in the patterns (if you want to know more: contact http://rh.cm-lisboa.pt/index.php?id=4525 or http://arquivomunicipal.cm-lisboa.pt/ )

Despite of its beauty the art is endangered in its existence. One major upheaval is its cost; another one is finding people who want to do it. As calceteiro Jorge Duarte explains in the movie below, it’s a heavy and not well payed job (450 à 700 € / month). This year the calceteiro-school of Lisbon cancelled its classes because only 4 students enrolled, director Luisa Dornellas of A Escola de Calceteiros explained us during our visit to the school.

The first calceteiros were prisoners laying calçada Portuguesa in 1842, in command of Lieutenant General Eusebio Furtado Pinheiro. Thus continuing a Mesopotamian craft that the Greeks and Romans brought to Europe. Present day calceteiros are mostly government workers, and they even have their own statue in Rua da Vitória. But as calceteiro Jorge Duarte explains in the movie, few people show respect for his profession.