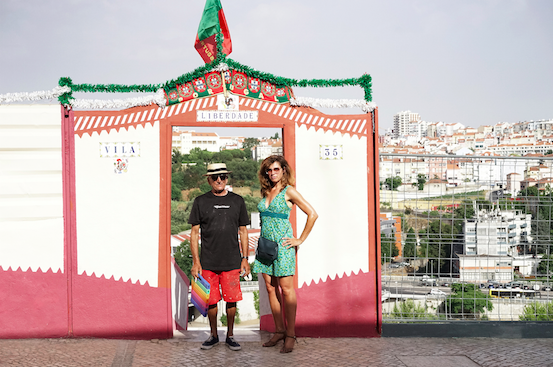 Zé João lives in ‘Bairro Serafina’, a poor suburb of Lisbon which distinguishes itself from similar neighborhoods because it’s crossed by the ‘Águas Livres Aqueduct’. This piece of 18th-century engineering is part of an almost 58 km long network of canals that used to bring drinkable water to the city. The aqueduct became famous when Diogo Alves, a Spanish criminal who was suspected of killing more than 70 people in Portugal from 1836 to 1840, chose the structure for his field of work. He would wait for his victims crossing the aqueduct (which was also used as a pedestrian bridge) rob them and then throw them into the deep, simulating suicide. He ultimately got caught, and was hanged. His head was kept in formaldehyde to enable scientists to study the mind of a criminal, and it is still intact today at the Museu de Medicina in Lisbon. But back to Zé João, who decided he didn’t want to make a detour from his house to the metro station of Campolide just across the hill. So he made a small path from his house on top of the hill, straight to the entrance of the metro, and finished it with a handmade colourful gateway and a vegetable garden on the slope. The enthusiastic handyman and his neighbours enjoy the benefit of taking this shortcut several times a day. We love this local hero!

all images by Sander De Clercq.

Next
Lisbon, city of Makers